(Albuquerque) – Active patient enrollment in New Mexico’s Medical Cannabis Program reached 104,655 patients as of December 31, 2020, according to data released by the New Mexico Department of Health (NMDOH). This represents an increase of 24,398 patients or 30% over December 2019 enrollment. 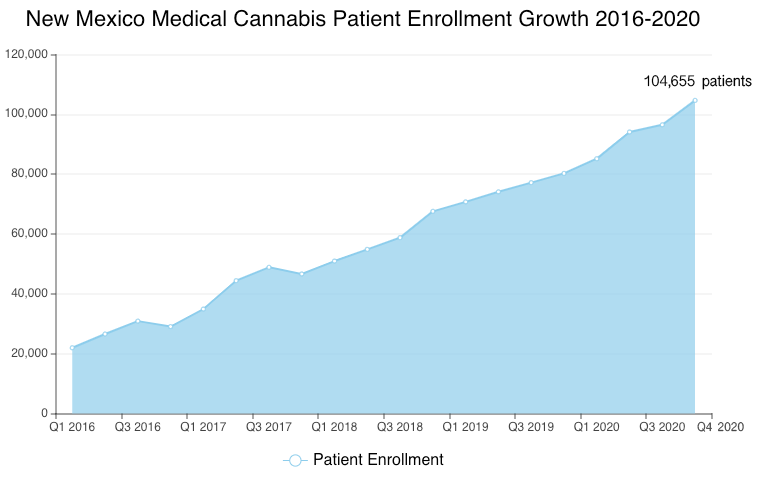 At the current rate, the program is experiencing a net gain of more than 2,000 new patients each month. Less patients are requesting personal production licenses for home cultivation. Last year nearly 10% of enrollees had approved home grows, in 2020 the number has declined to 7%, putting more supply demand on the licensed commercial producers.

In fall 2018, NMDOH was court-ordered to raise the plant count after the previous limit was found to be arbitrary, capricious, and frustrated the purpose of the Lynn and Erin Compassionate Use Act. At that time, there was less than ½ plant per patient available.

Per the judge’s order and given the current plants-per-patient ratio is equal to the ratio when NMDOH was court-ordered to increase cultivation capacity, the department has a duty to significantly raise the plant count to ensure patient needs are being met.

The Medical Cannabis Advisory Board (MCAB), a statutorily-designed body intended to recommend changes to the program, recognized the need for increased access to cannabis during its 2020 meetings.

In November, the MCAB recommended that the program nearly double patient purchase limits from 8 ounces to 15 ounces over a 90-day period. In December, the board recommended that NMDOH significantly raise the plant limit. It is unclear whether the NMDOH Secretary will make the programmatic changes that reflect the board’s recommendations and patients’ need for an adequate supply.

The ballooning of patient enrollment during 2020, as well as the undeniable exponential growth the program has seen over the last several years, indicates New Mexicans need cannabis now more than ever. “To witness such positive growth during the biggest healthcare crisis in the last 100 years is beyond impressive,” said Duke Rodriguez, CEO and President of Ultra Health®. “If this were any other industry besides cannabis, regulators would be tackling every obstacle to make way for enhanced patient support, particularly availability and affordability. The goal in 2021 will be to push for vital programmatic changes to meet the promise of the Lynn and Erin Compassionate Use Act, to provide the beneficial use of medical cannabis for every patient enrolled.”

END_OF_DOCUMENT_TOKEN_TO_BE_REPLACED

Patient sales up 55% over prior year; available supply substantially below amount mandated by state law

END_OF_DOCUMENT_TOKEN_TO_BE_REPLACED

New Mexico’s reciprocity legislation is the most patient-friendly and generous in the country, allowing medical cannabis patients with proof of authorization from any state, the District of Columbia, a territory or commonwealth of the U.S. or a New Mexico Indian nation, tribe, or pueblo to purchase medical cannabis while in New Mexico.

Currently, no other medical cannabis reciprocal program in the United States recognizes Tribal sovereignty in accepting authorizations approved by Tribal nations or pueblos.

While many other reciprocal programs in medical cannabis states require a medical cannabis “card” specifically, New Mexico’s program only requires proof of authorization which includes doctor recommendations like those more commonly issued in California.

Furthermore, reciprocal participants may have qualifying conditions that are not currently approved for medical cannabis patient status in New Mexico, and they are not required to comply with New Mexico’s patient card application nor renewal requirements.

Overall, non-residents with an authorization for medical cannabis from outside of New Mexico will have an easier qualification than a New Mexican cardholder in regard to multi-state eligibility, purchase limits and cost to participate.

Reciprocity was passed during the 2019 Legislative Session when lawmakers made sweeping changes to the Lynn and Erin Compassionate Use Act for the first time since the bill was originally passed in 2007.

The legislative passage of reciprocity signals an increasing move toward equitable healthcare rights for medical cannabis patients including continuity of care and consistency in dispensing prescription medicine as seen in traditional healthcare systems.

“It is exciting to see New Mexico’s Medical Cannabis Program begin to embrace continuity of care,” said Duke Rodriguez, CEO and President of Ultra Health®. “Access to healthcare, especially medical cannabis, should not be limited to arbitrary requirements like where a person lives or whether the state believes their condition should qualify. The ongoing challenge now will be to provide for the medical cannabis needs of 100,000 New Mexicans and the added reciprocal visitors from out-of-state amid historic medical cannabis supply shortages and COVID-19.”

New Mexico’s program is currently supporting a record number of nearly 100,000 patients while operating on its lowest supply of available flower and bud since December 31, 2018. This shortage of available medicine is already being exacerbated by the effects of the pandemic due to the considerable surge in demand for medical cannabis in New Mexico and across the country during the COVID-19 outbreak.

Demand is unlikely to slow down as New Mexico’s projected revenues for the second quarter of 2020 are expected to increase by 60% over the same period in 2019. Patient enrollment in New Mexico’s program reached 92,042 patients as of May 30, 2020, a 26% increase over May 2019 enrollment.

Enrollment is forecasted to surpass 100,000 active patients by year-end.

The program enrolled 85,168 patients as of March 31, 2020, an increase of 20% over March 2019 enrollment. A total of 6,128 pounds of cannabis flower was sold to patients during the first three months of the year, representing an increase of 30% over total pounds sold in the first quarter of 2019.

“Robust activity during a period of high uncertainty is a testament to the essentialness of cannabis,” said Duke Rodriguez, CEO and President of Ultra Health®. “Going forward, the new normal will create a far greater demand on the medical necessity, product availability and patient affordability of quality cannabis care.”

The Medical Cannabis Program is currently supporting a record number of nearly 90,000 patients while operating on its lowest supply of available cannabis since December 31, 2018. The New Mexico Department of Health (NMDOH) reported 6.2 million grams in stock for the fourth quarter of 2019, and the available inventory for the first quarter of 2020 declined 58% to only 2.6 million grams of cannabis in stock.

On April 2, 2020, NMDOH incorrectly stated the 34 licensed producers had 36,000 pounds of unsold cannabis in stock. However, the most recent quarterlies filed by the producers confirmed just 5,714 pounds of cannabis in stock – an overstatement of 530% or 30,000 pounds. It is unclear how NMDOH determined their 36,000-pound figure.

The depletion of available supply remains even after the NMDOH raised the plant cap to 1,750 plants per producer in September 2019. The absence of relief on supply indicates there was substantial pent-up demand from the 450 plant cap rule, and the 1,750 plant cap is insufficient to meet the increased patient enrollment and growing needs of patients.

New Mexico’s patient enrollment is outpacing neighboring Colorado’s medical program, which enrolled 81,722 patients as of March 31, 2020. Although the two programs have comparable patient enrollment, New Mexico continues to lag behind in patient purchase limits, plants in production, and patient sales.

Historically, petitions have been submitted to New Mexico’s Medical Cannabis Advisory Board to change plant production limits and patient purchase limits to be more consistent with neighboring states’ medical programs. The NMDOH Secretary has elected not to accept or endorse petitions related to these subjects.

As New Mexico’s program grows larger than Colorado’s, key adjustments need to be made to fully address adequate supply and patient access. The current programmatic differences of the New Mexico and Colorado models have led to significantly different patient sales, production, available plants per patient, pricing, and purchase limits between the two programs.

New Mexico patients pay higher prices for medicine they need because supply is hampered by regulation, and they are unable to obtain medicine in the quantities their conditions require. New Mexico continues to mandate the lowest patient-purchase limits in the country despite written confirmation from NMDOH that the department would revisit purchase limits during the summer 2019 rulemaking process.

New Mexico’s program also had far fewer plants in production due to arbitrary overregulation. In 2019, cannabis producers in New Mexico had a total of only 26,098 plants in production, largely in part due to the restriction of a maximum of 1,750 plants per producer. Meanwhile in Colorado, more than 319,374 plants were available statewide for medical cannabis patient needs with an enrollment similar to New Mexico.

Since Colorado legalized cannabis for adult-use, the state’s medical program has fallen from a high of 115,000 patients to now less than 82,000. New Mexico is likely to face a similar reduction in patient enrollment if patients cannot access the medical program in a more beneficial way than nonpatients can access the future adult-use program.

(Albuquerque) – Combined patient sales from the 34 licensed producers in New Mexico’s Medical Cannabis Program totaled $129 million in 2019, an increase of $23 million or 22% over reported patient sales in 2018.

END_OF_DOCUMENT_TOKEN_TO_BE_REPLACED

(Albuquerque) – Patient enrollment in New Mexico’s Medical Cannabis Program reached 77,168 patients as of September 30, 2019, according to data released by the New Mexico Department of Health (NMDOH). September’s numbers represent a 31% increase over enrollment in September 2018.

The newest addition to the patient statistics report is an “Out of State” category, in which 12 patients are listed. The issuance of three-year patient registry cards to out-of-state participants comes after Santa Fe District Court Judge Bryan Biedschied ordered NMDOH to comply with the new statutory language and accept nonresident patients into the program.

The New Mexico Medical Cannabis Program is the first medical cannabis program in the country to allow nonresidents to receive three-year cards and purchase medical cannabis while in the state.

END_OF_DOCUMENT_TOKEN_TO_BE_REPLACED

(Albuquerque) – Patient enrollment in New Mexico’s Medical Cannabis Program reached 77,141 patients as of August 31, 2019, according to data released by the New Mexico Department of Health (NMDOH). August 2019 numbers represent a 34% increase over total enrollees in August 2018.

While rural, southern New Mexico is driving most of the patient growth rate in the program, counties along Colorado’s shared border represent the slowest growth. The lack of comparable patient enrollment experience in New Mexico’s northern counties can be attributed to lower prices and the ease of access to Colorado’s adult-use market despite state and federal laws concerning cannabis crossing state lines.

PTSD, severe chronic pain, and cancer remain the top qualifying conditions for medical cannabis treatment. The program serves 39,297 patients with PTSD; 25,870 with severe chronic pain; and 4,064 with cancer, as of August 31, 2019.

Since approving the conditions, NMDOH has failed to provide proactive outreach for potential patients who may find relief with medical cannabis. In April, a NMDOH survey found that nearly 2 out of 3 New Mexicans know someone who has been addicted to opioids. When applied to the state’s adult population, more than 1 million New Mexicans know someone who has suffered or is currently suffering from opioid addiction.

Can’t find what you’re looking for. Perhaps searching can help.